This Easy Vegan Mug Brownie recipe is one of my favorite single-serving vegan desserts for when you don’t want to make an entire batch of brownies in order to get your chocolate fix!

This vegan cup brownie is fudgy in flavor and texture, with melted chocolate chips and chopped nuts scattered throughout the batter.

Top it off with additional chocolate chips, berries, or a drizzle of peanut butter before cooking in the microwave for a super quick and easy indulgent treat that’s completely vegan and a healthier dessert option too!

Place all of the dry ingredients (flour, sugar, cocoa powder, salt and baking powder) into your mug or a large ramekin. Whisk them together until combined.

Add the almond milk, oil and vanilla extract and then stir again well.

Fold in the chocolate chips and chopped walnuts and stir once more.

Finally, pop it in the microwave for 60 seconds at high power. Check it; if the brownie is still wet, bake it for another 30 seconds.

Usually, the mug cakes remain just a bit raw in the centre after the first 60 seconds, if that’s the case, you can stop; if not, it could end up overcooked and dry.

Why make a brownie in a mug?

This vegan brownie in a mug is a single serving brownie dessert, cooked in the microwave for 60-90 minutes. Being vegan-friendly, it’s an eggless mug brownie that’s also free of dairy while loaded with fudgy chocolate goodness for anyone looking for a healthier dessert that will satisfy those chocolate cravings!

Can I make this eggless mug brownie in the oven?

Absolutely! While I love the convenience of whipping up this eggless microwave brownie in the microwave, there’s nothing stopping you from baking it instead in the oven.

You’ll need to assemble the ingredients in an oven-safe dish in similar size to a mug such as a 3.5 inch ramekin and bake your vegan brownie for 8-12 minutes at 350℉ (175C). Allow the baked brownie to cool for about 10 minutes before eating it since it’s going to be extremely hot straight out of the oven!

What toppings can I add to this vegan cup brownie?

If you want an indulgent egg free mug brownie, consider adding the following toppings to the brownie batter before cooking in the microwave:

Apart from adding various toppings to this vegan brownie in a mug prior to cooking, you could also serve your cooked mug brownie with a dollop of whipped coconut cream or a scoop of dairy-free vanilla ice cream!

The great thing about this vegan microwave brownie is its versatility! Here are some ways that you can easily adapt this vegan mug brownie recipe:

Other Easy Vegan Treats to Try:

Usually, the brownies remain just a bit raw in the centre after the first 60 seconds, and that’s a clue to stop; if not, it could end up overcooked and dry.

Be creative about mug cakes, you can change the chips for shredded coconut or blueberries, and the results are delicious too. 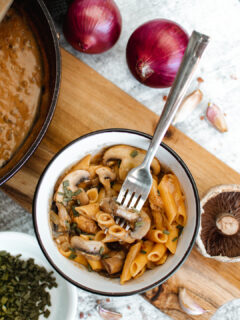 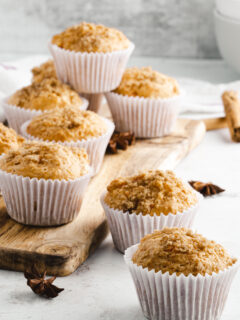