Crunchy, chewy, and delicious, these vegan rice crispy treats are popular with kids and kids-at-heart! They’re easy to make, have just 6 ingredients, and have a decadent chocolate shell.

With my son’s birthday approaching recently, I got to thinking about vegan options for kid-approved party food!

Rice crispy treats were a staple party item when I was growing up, but they were typically made with marshmallows, sprinkled with candy, and overall pretty sickly sweet…

I wanted to try making a healthier version, that was just as fun, just as delicious (if not more so!), but a whole lot healthier and with no added refined sugar. Something that wasn’t just allowed as a birthday treat.

Using peanut butter instead of marshmallows, and plain puffed rice instead of Rice Krispies, you’re cutting out a whole lot of sugar, but replacing it with flavorsome goodness instead. I promise you, you’ll end up loving these puffed rice snacks more than the ‘real deal’.

Traditionally, no. Let’s start with their main ingredient – Rice Krispies.

The original Rice Krispies from Kelloggs aren’t vegan as they contain a type of Vitamin D that’s derived from lanolin. If you’re not already aware, lanolin is the oil that’s produced by sheep to keep their wool waterproof. So any rice crispy treats that use Rice Krispies as an ingredient aren’t going to be vegan.

Next up, they normally use marshmallows and butter as binding agents.

Marshmallows are made with gelatin – a product normally made by boiling down animal ligaments, skin & bones. And we all know where butter comes from.

Luckily these ingredients are easily subbed for more vegan-friendly alternatives, that are also much healthier for you too!

In a large bowl, combine all the ingredients except the puffed rice and chocolate.

Then add in the puffed rice and sir to combine.

Line a 6″ baking tray with parchment paper and pour in the vegan rice crispy cakes mixture.

Use a spoon to spread out the mixture and ensure the tray is evenly coated.

Pop the tray into the fridge for 30 mins to set.

While the base is setting, we can make the chocolate topping.

Simply combine the chocolate with 1 tbsp coconut oil and melt in the microwave for 45 seconds, or slowly on the stove in a double boiler.

Once the base is set, pour the melted chocolate on top, making sure to evenly coat it.

Pop the tray back into the fridge for another 30 minutes to allow the chocolate to harden.

Cut the rice crispy treats into 8 pieces (or 16 if you prefer/are serving them to kids), and enjoy!

How to Store your Vegan Chocolate Rice Crispy Treats

Keep any leftover bars in an airtight container. You can keep them in the fridge for up to a week.

In a big bowl, add all the ingredients for the base layer, except the puffed rice. Mix them well to combine.

Line a 6’’ tray with baking paper and pour in the base mixture.

Use a spoon to press the mixture down and spread it out evenly.

Meanwhile, melt the chocolate with coconut oil in a microwave for 45 seconds, or slowly on the stovetop in a double boiler.

Pour the melted chocolate on top of the puffed rice once it has cooled. Make sure everything is well covered with the chocolate.

Refrigerate for another 30 minutes or until chocolate is hard.

Cut it into 8 large or 16 small bars and serve!

I prefer to use puffed rice in this recipe, rather than Rice Krispies to avoid added sugar. Regular Rice Krispies aren't vegan as they use an animal-derived form of Vitamin D. 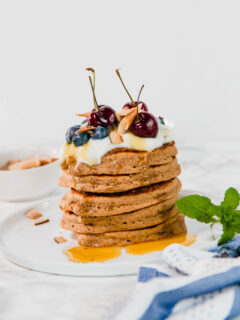