This Simple Vegan French Toast Recipe is the plant-based version of your favorite weekend breakfast! With just a handful of ingredients and 4 steps, this eggless French toast is the perfect weekend breakfast or enjoy anytime for brunch, lunch or dinner!

French Toast has long been one of my favorite weekend breakfast treats. When I made the switch to vegan, I never even considered vegan French Toast as a possibility. After all, the main ingredients are definitely not vegan – eggs, milk, cream.

Luckily, I was completely wrong! Eggless French Toast is actually SUPER easy to make – just as easy, if not more, than the traditional version!

This is the best vegan French toast recipe I’ve tried. It starts with just the basics – bread, almond milk, cinnamon and vanilla and adds in a few secret ingredients.

The secrets? Nutritional yeast, cornstarch, and a flax seed egg.

This flax seed French toast has, in my opinion, a texture closer to traditional French toast than those recipes made with chia seeds. It helps to thicken the mixture and gives the toast that iconic “eggy” feeling.

On the other hand, nutritional yeast gives it an “eggy” flavor and overall essence of being just like your traditional French toast. The cornstarch helps create a crisp texture once cooked.

There aren’t any complicated or hard to find ingredients in this flax egg French toast recipe, you’re likely to have everything you need sitting in your pantry already.

How To Make Plant Based French Toast

Making vegan cinnamon French toast couldn’t be easier! You’ll only need a bowl, whisk, and a skillet to create this recipe at home.

3. Dip a piece of bread in the liquid mixture, turning it to coat both sides evenly. Don’t keep it there too long or it could break.

4. Fry the bread on both sides on medium heat with a drizzle of oil or a small dollop of vegan butter.

What to Serve with Non-Dairy French Toast

As an Amazon Associate and member of other affiliate programs, I earn from qualifying purchases. 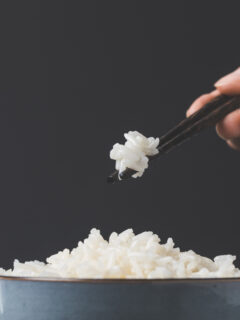 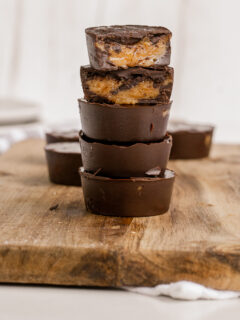